We hope this page will eventually contain all the known data about the SU-8 photoresist. Thus, we need your help! Send all your data number 788, and I will include it in this page, with credits, of course!

The SU-8 is a negative, epoxy-type, near-UV photoresist based on EPON SU-8 epoxy resin (from Shell Chemical) that has been originally developed, and patented (US Patent No. 4882245 (1989) and others) by IBM. 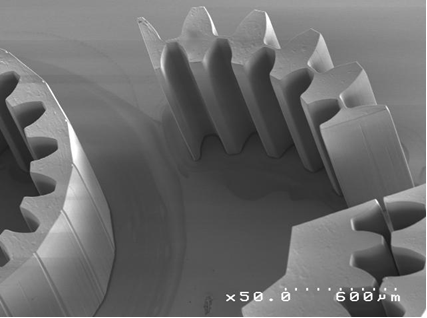 This photoresist can be as thick as 2 mm and aspect ratio >20 and higher have been demonstrated with a standard contact lithography equipment (picture courtesy of R. Yang).

These astounding results are due to the low optical absorption in the UV range which only limits the thickness to 2 mm for the 365nm-wavelength where the photo-resist is the most sensitive (i.e., for this thickness very little UV light reach the bottom of the structure).

Of course LIGA still yield better results but low-cost application will undoubtedly benefit from this resist that is well suited for acting as a mold for electroplating because of its relatively high thermal stability (Tg>200°C for the cross-linked (i.e., exposed) resist).

Two companies have now bought a license from IBM to sell the photoresist :

Using the litterature reference, the following tables, based on an original compilation from Loren St Clair, gives some properties of the resist. We begin with the known mechanical properties:

The next table gives data about physical properties of the polymerized SU-8:

And this table gives data about the electromagnetic properties of the polymerized SU-8:

Here are some general properties that can not fit in a table, and are deducted mostly from experiment. They should not be taken for more than that :-) 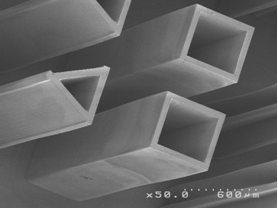 Here are all the data gathered over the years pertaining to the SU-8 processing. These datas complete the general information you may obtain from the literature, and are mostly tricks. But they do help a lot :-) Contact in bracket gives the source of the info. The text is almost verbatim from the source, with only very slight edition when it was needed. When some details are 'not available', it is mostly because of some proprietary information that could not be divulged openly. Sometimes, SU-8 processing looks more like an art than like an exact science :-)

Here is a list of further links to more information on research done with the resist. Enjoy.

Further very useful information (and the previous one :-) from the IBM and the EPFL teams (and a few others...) may be found in the following papers (please contact us if you know other references - specially historical ones :-) This list was established with the help of Loren St CLAIR, Hubert LORENZ, Arnaud BERTSCH, Marc HEUSCHKEL, Patrick MOUNAIX, LING Zhong-Geng, Stepan LUCYSZYN, SUM Tze Chien, Paul DENTIGER, ZHANG Jun, YANG Ren, TEH Weng Hong and David WOOD (it is available as a BibTex database).

Here is a list of commercial products or commercial application related to the SU-8. If you don't have time to develop your own process... it is a very good alternative :-) Still, you may want to contact the companies cited to get some tricks for free... or sell yours :-) Oh, BTW, they are of course listed at no charge, so if you want to be there just drop me a line :-)

This list of local vendor for SU-8 is not maintained actively, but only 'reactively' - when someone tells that a new vendor exists or that he changed then a link is added or updated. Thus don't expect the list to be accurate, but to help you I listed the date when the link has been added or changed :-)